“I try to do two things each day for my recovery: trust God and help others.” 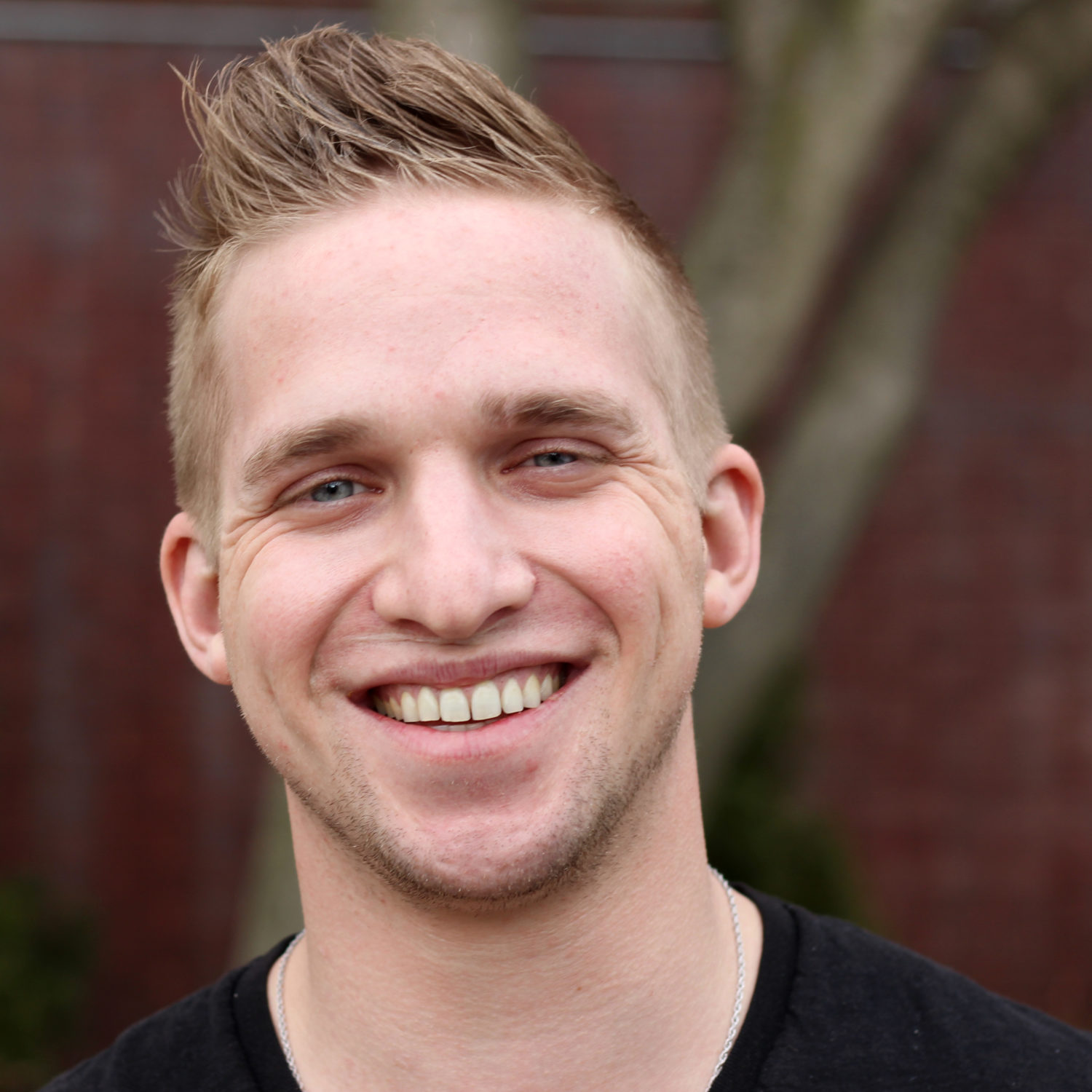 Thanks to you…Greg has learned his purpose in life is to help others.

Greg is 25 years old, and like many of the young men here at HUM, he grew up in a family that provided every opportunity for him. His family regularly attended church and Greg, like his two older brothers, attended a private school.

Greg admits that he has always been a bit a rebellious. A fireworks incident got him suspended in seventh grade, and by eighth grade, he was drinking with his peers.

At the beginning of his freshman year, Greg moved from alcohol to marijuana. By his junior year, Greg was using OxyContin and cocaine. His family tried to help with rehab programs, but Greg began a long spiral of accidents, incidents, rehab, short periods of sobriety, and eventually, relapsing.

In 2015, at the age of 24, Greg’s parents kicked him out after he robbed them. “I was homeless, but I couldn’t do it. I slept on a bench near HUM, but didn’t know this was the Mission.” After two nights, he called his dad who told him about Helping Up Mission and Greg agreed to give it a try.

He arrived, still dirty and high. When he came into the building, it wasn’t what he was expecting. It was comforting to see someone from his church working at HUM, and that helped, but he still struggled. He called home hoping to leave, but his dad told him, “Greg, this is that moment where you make the decision if you want this.” For Greg, this was the time to surrender.

Greg spent ten months at HUM, went back to college, and was doing well. But, he stopped going to recovery meetings, was not working the 12 steps and decided that he should celebrate his birthday by using. After all, he was doing so well; perhaps he could get away with it just one more time. Looking back, he says, “Part of me thinks that it was because I was doing so well – maybe I could get away with one.”

He borrowed his parent’s car, telling them he was going to a meeting. Instead, he went to his usual place to get drugs. “I shot up while driving and I just had an immediate overdose…the last thing I remember was a loud crash.” Greg crashed into a bus on Maryland Avenue. He remembers, “My next conscious memory is three weeks later in Johns Hopkins ICU surrounded by doctors with machines and tubes everywhere. My parents are there and crying, so I started crying.” He had been in a coma for three weeks, having nearly died several times.

Greg recalls his mother was “just praying that she didn’t have to bury her youngest kid.” She wasn’t the only one praying: the HUM staff, his friends, and his church family were all praying for Greg. After a month in the hospital, he went home and took another month to recuperate.

In May, Greg returned to HUM. “Ever since I got out of the hospital, all I wanted to do was come back to the Mission. I have never been clean for ten months since I started doing drugs. I’ve been to many treatment centers…but God is doing something good here.”

Greg returned and started the year-long Spiritual Recovery Program all over again. He remembers, “Three weeks after I came back, I watched the seed class I came in with graduate.  My mom came and watched with me. I was happy to be alive.” The staff at HUM saw a difference in Greg this time around. Greg explains, “When I got out of the coma, I had learned that two of my friends did the same thing (overdosed) and didn’t wake up the next morning. I did, so I knew that I had a purpose. There is no reason why I should be alive. I saw a purpose in my life.”

He is actively working the 12 step program now and encourages those struggling with the steps, “don’t look at them like they are hurdles you have to get through. Look at them like guard rails that you have to stay in between. You do them on a daily basis.”

Each day is new, and Greg has a plan for today. He offers this explanation: “I try to do two things each day for my recovery. That is to trust God and to help others. You don’t have to be an addict to relate to my story. You just have to be a human being and realize that you guys are alive for a purpose. If you trust [in God], then you start to live life with a purpose. You start to see value in things.”

“The second part is helping others. That is the key. When I am helping another, I am focused on them entirely. That is what works for me today.”

Greg is now in college, studying human services administration. He would like to go into the substance abuse field to share his story and help someone else not make the same mistakes he made. He wants to help others to see that they have a purpose.