“Running is therapy to me” 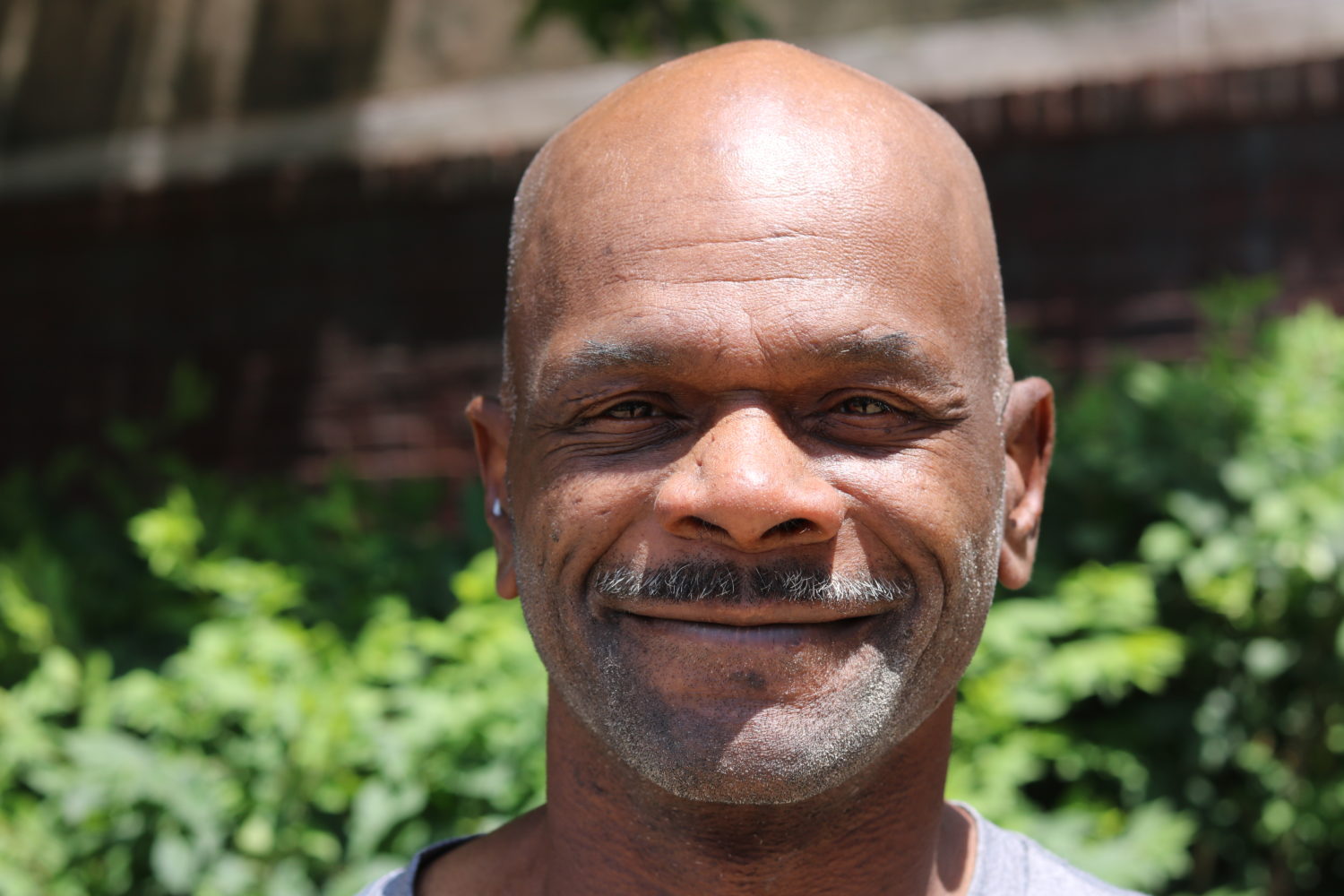 John, 50 years old, was born at Baltimore Memorial Hospital as one of six kids. He graduated from Arundel Senior High where he played baseball and ran track. He was especially close to his mom growing up but admits, “I was a curious kid, so I always stayed in some kind of trouble. She always had her hands on me.” His father was around but was not very involved in his life.

At “the age of 16 or 17 years old, I basically went on my own path” and began hanging out and smoking marijuana. After John graduated, he worked at a racquetball club and watched people playing the sport. “I started to fall in love with the game. I used to sneak on the back courts on my days off.” The club pro taught him a few strokes and soon John was beating everyone around. He got sponsored and became a semi-pro racquetball player. “The thing that killed me with that is I would go to tournaments with nobody watching me, nobody behind me. I felt kind of lonely at tournaments and got introduced to cocaine.”

He met his first wife in the racquetball club, but after she became pregnant, she left him because of his drug use. She moved to Montana and John followed her. He remembers, “My dad didn’t have nothing to do with me when I was a kid, and I wasn’t going to do that to my child.” He started going to 12 step programs, but couldn’t relate because everyone in those groups was an alcoholic. “They didn’t want to hear my story, and I couldn’t tell my story.” John and his wife got divorced and then remarried. When they were apart for a year or two, he went on using sprees. They divorced again and, after seventeen years in Montana, John moved back to Maryland and went back to his cocaine and his life as a “go fast boy.”

John came to HUM for the first time in 2012 because he was “sick and tired of being sick and tired.” He was dating a girl whose brother was at HUM. He stayed for several months but got in trouble while away for the weekend and couldn’t make it back to HUM. “It ate at me because I was doing the right thing and let the wrong thing happen. I eventually knew that I was coming back here.”

John stayed clean for almost three years. But, he started dwelling on all of the problems going on. His mother was battling cancer, and his brother passed away. He thought, “I didn’t come home for this.” He missed his son, but John says that his past using “was shaming me from keeping in touch with him.” After his mom had lost her battle with cancer, John says “I fell right back in the boat I always fell back in.”

His girlfriend wanted him to get help and called around. Eventually, John told her to bring him to HUM. “In my own mind, I always knew I was going to come back.”

John ran track in high school, the 440-yard dash and some long distances. When he was at HUM in 2012, he joined Back on My Feet and ran with them as part of his recovery. Upon returning to HUM, joining a running team was a priority for him. “I went right to my counselor and told him I need to get back on the team.” He explains running “is therapy to me. It puts me at ease. It lets me think, it lets me really think about what’s going on in my life.”

John explains that he isn’t normally one to socialize, but being part of the Back on My Feet team has helped him to relax a little. “When I first joined the team…I wasn’t really a talker and everybody on the team talks. Once I settled in and realized it was okay to talk, they aren’t trying to dig into your business; they are just trying to help you. Once I got that in my mind, I was good with it.” Now, John says his teammates think, “Man he doesn’t shut up.”

The time on the running team encourages John and helps him to help others. “I find myself around the Helping Up Mission talking to guys…trying to show them certain things to do, not to sit up in corners hovered up. I even encouraged some guys to get on the team and just try something different.”

John is currently training to run the marathon in the Baltimore Running Festival in October. He recently finished in the top thirty-five runners in a ten miler with a time of 78 minutes.

In addition to the support he has found in a running group, John also goes to an NA 12 step program. “For me, I am dead in the water without it. You can’t do this alone; it’s just impossible.”

John is proof that good people can make bad choices, and while he may have to live with the consequences of those choices, there is hope. Once he graduates from Helping Up Mission, John plans to stay connected with his support community of HUM, as well as his NA group and will keep running as alumni of Back on My Feet.