Jimmy is a Product of Your Generosity 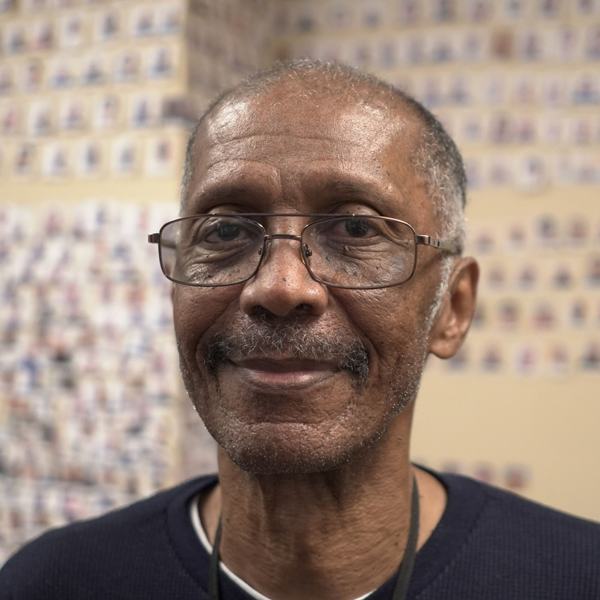 Jimmy is a Product of Your Generosity
“He said that I can have all the joy, if I do what he wants me to do.”
Jimmy B, age 62, was born and raised in Baltimore, Md. A child of the sixties, Jimmy was raised in an all-black neighborhood, during a time of segregation, but did not witness the tumultuous times. “I didn’t see the riots, but I grew up around them. My mom was protective of her children. We lived in a rough neighborhood, so she kept us in the house most of our lives. She was also a minister, so we stayed in church twenty-four seven. My father was abusive and an alcoholic, he would come home drunk and lay on the couch and sleep all day. Therefore, my mother had to work two jobs to keep clothes on our backs and food on the table. In 1972, her hard work paid off and she was able to afford a house and we got out of “the ghetto,” Jimmy recalls.
“I started getting high when I was 12 or 13. Nothing forced me to get high. I just enjoyed getting high. I thought that I was missing something. But I never wanted to grow up to be like my father.” Eventually, Jimmy’s father passed away from a stroke. The man that he did not want to become, Jimmy became. “I knew that I had a problem when I started losing everything. I never have a problem getting a job. But I would not keep the job, because I would get high and not go back to work. My father passed away in 2007 and I was still getting high. Even after everything that he put us through when I was a child, I wanted to get sober before he died. I wanted him to be proud of me. I still loved him, and I wanted him to see me sober. I finally got to my wit’s end in 2009 and decided to go to rehab.”
From 2009 until 2019 Jimmy was sober. “I was clean. I was doing everything that God wanted me to do. I stayed in church and was being obedient. Everything was working out fine. But eventually, I stopped being obedient. And soon things started falling apart. I became disobedient. All the things that I did to stay sober, I stopped doing. I stopped going to church. I stopped serving God. I stopped serving other people. I started drinking again. I would get one beer, and that one bottle became three, and then four bottles of beer. Just like they say in Narcotics Anonymous, ‘one is too many, and a thousand is not enough.’”
One day God spoke to Jimmy. “Why do you keep going back to bondage? And He spoke to me about obedience. I am obedient now and things are starting to work. I was not a thief when I was getting high. But I stole from myself. I stole my own joy. And when God spoke to me, He said that ‘He has stolen me.’ He put the food, the Spirit in me. He said that I can have all the joy, if I do what he wants me to do. And I finally have that joy, the gentleness in his kindness.”
In 2019, after Jimmy had relapsed, his sister spoke with him about pursuing sobriety at Helping Up Mission (HUM). “My sister knew somebody that used to work at HUM, and she said,’ why don’t you go ahead and try HUM.’ I had nowhere else to go. I lost everything. I had no car. I was down on my wits end and I came to Helping Up Mission with nothing but the clothes that I had on having not showered in two weeks. I came here, walked up to the door broken and they opened the door. They opened it with open arms and told me to come in. I was so tired.
At first, Jimmy just wanted to be left alone. “I did not have anything to lose and that hurt.” Over the past year, Jimmy started getting into good thoughts and sobriety was starting to become a reality. “Every time that I came to chapel on Fridays, I became motivated seeing the guys walking across the stage. I said that is it. That is what I am going to do, graduate the Spiritual Recovery Program. I stopped wanting to be left alone and began grabbing the young guys, talking to them, and putting them under my wing. I wanted to show them that they could have everything that they want, right now and giving them my heart. When I finally graduated and they called my name, everybody stood up and applauded. I thought man, this is what God was talking about. It made me feel good! “
Today, Jimmy is looking to retire at age 62 and loves his work therapy assignment as a driver for HUM. “I love driving and it is one of my passions. I like seeing other people have fun. But my plans may change when the new Women’s and Children’s Center is built down the street, maybe I’ll apply for a job and delay my retirement.”
“During my time here, you may have to do things that you do not like, to get what you need. You might need to accept the bad things that happen, because as long as you live on this earth, you will go through trials and tribulations. But this is going to be my life. My desire is to live a more fruitful life, live a simpler life. To All of the people that make HUM happen, thank you. I am a product of your generosity!