I just returned from my dig 9 miles north of Jerusalem in Israel’s West Bank. Our 11th season, we had some wonderful results. You can get details at www.biblearchaeology.org.

But beyond archaeological finds, there were some important lessons learned, as well – for me! Part of my responsibility is to provide leadership to the supervisors of all the 5×5 meter squares we dig. Since archaeologist dig in the dirt down to bedrock, looking for remains of human civilization, a basic rule is to dig every square to bedrock. That way you find everything that is there.

But I’m also aware that folks have volunteered their time and resources, often with great sacrifice, to be with us. So I try to make the dig as meaningful for everyone, as possible. Sometimes these 5×5 meter squares are daunting tasks for both supervisor and volunteer digger, alike, so I do a bunch of cheerleading, too!

Consequently, to follow the rules and help everyone out, I often suggest that the 5×5 meter square be subdivided to smaller sections and take just that part to bedrock.

Four years ago I suggested such a strategy for a particular square. They dug the subdivision to bedrock and found what I thought they would find – nothing. A dry hole and the end of this square, as far as I was concerned.

But this year, the dig director (my boss!), said go ahead and finish that square. They did and found almost nothing…till the very end! That’s when they uncovered another of the city’s gate socketstones reused in another location – giving us 3 of 4 socketstones, now. It was very exciting. 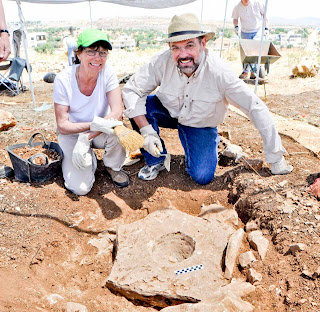 Then they dug the last little corner of the square and found the largest of 5 carved-in-bedrock subterranean storage silos excavated on the site this season! Great finds, but important lessons – for me! We asked God to lead us 4 years ago and since He directed us to dig those squares, we should have dug the whole thing to bedrock back then. Wonder if I’ll ever learn!?!?

One Square at a Time,
Pastor Gary Byers
Deputy Director