When Brian walked onto the chapel stage to graduate, I handed him a coin. He’s one of the first to receive it. Groups like AA and NA have tags and coins to commemorate sobriety milestones, and we wanted to create a coin to honor our one-year SRP graduates.

One stage of the coin design process (Nathan Yoder)

We commissioned artist Nathan Yoder for the design, and we couldn’t be more proud of the result. On the front, a tiny oak sprouts out of the ground atop Federal Hill, backed by the Inner Harbor sunrise. Framing the scene are 12 stars, evoking 12 months or 12 steps, and the words of Jesus, “With God all things are possible.” On the back, the sprout has grown into a mighty oak, with a banner in its branches: “One year of spiritual recovery.” 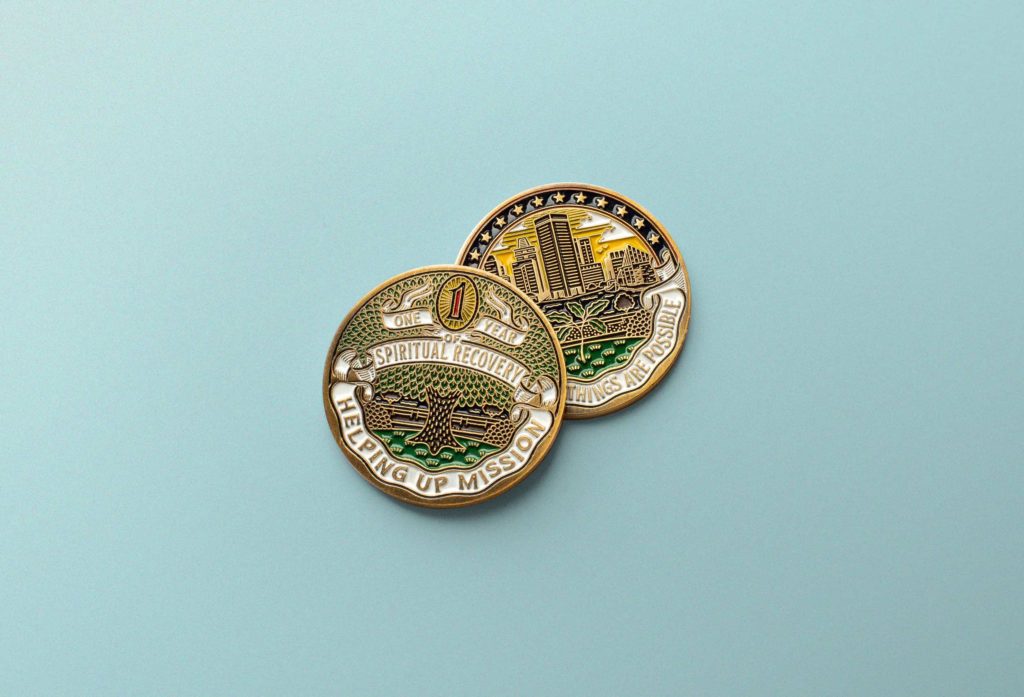 The coin, front and back (Nathan Yoder)

This coin will be a touchstone for Brian and many graduates in the coming years. There’s a hymn about God’s faithfulness with the line, “Hither by Thy help I’ve come.” It’s our hope that these coins would spark a similar remembrance in the men – and soon women – who will carry them. 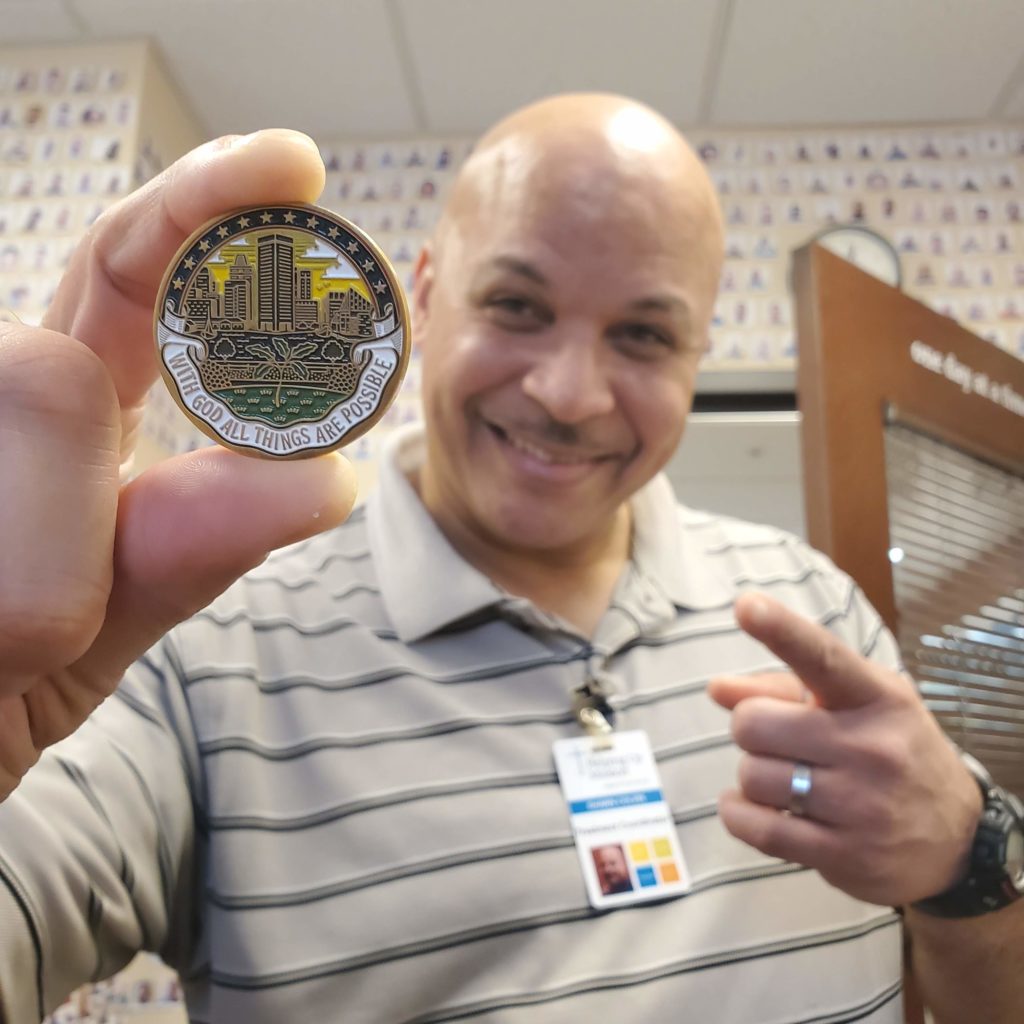 To receive our monthly newsletter please contact our Philanthropy team by email at philanthropy@helpingup.org or by calling 410-675-HELP. If you would like to read other stories about the men and women we serve please visit:Recovery Stories

Experience firsthand the despair of addiction and the hope of recovery. Look through the eyes of a man as he wanders through the streets of Baltimore, homeless, hopeless, in active addiction. Then he enters into long-term recovery, and things begin to change…

This point-of-view film is a creative composite of the life experiences of many men at Helping Up Mission. It was produced in collaboration with Mozell Films.

Last month, we had the privilege of welcoming Diane Langberg to our campus for a visit. Dr. Langberg is a practicing psychologist whose clinical expertise includes 45 years of working with trauma survivors and clergy. She speaks internationally on topics related to trauma, ministry and the Christian life.

Lessons from a Life of Counseling

Dr. Langberg shared with our staff and interns some of what she’s learned from 45 years of counseling people who have survived sexual abuse and other kinds of trauma.

Dr. Diane Langberg shared with our clients some of what she’s learned about healing from shame, sexual abuse, and other kinds of trauma.

00:01 The many faces of shame (below is the Shame Compass that Dr. Langberg refers to in this section) Dr. Langberg is the director of a group practice in suburban Philadelphia, Pennsylvania, staffed by Christian psychologists, social workers and counselors. She is a faculty member of Westminster Theological Seminary and the author many books, including Suffering and the Heart of God: How Trauma Destroys and Christ Restores, In Our Lives First: Meditations for Counselors, and On the Threshold of Hope: Opening the Door to Healing for Survivors of Sexual Abuse. You can learn more about her work at her website, dianelangberg.com.

Fear – Elroy, in his story, said it was one of the main motivations that got him started on a pathway to drugs. Fear to fit in. Fear to face the areas in our lives that we run from. Fear is one of, or even, the most, powerful emotion we can feel as human beings.

At the Mission, we break fear down into several acrostics.

False Evidence Appearing Real is one. In Elroy’s case, the evidence he had in the feeling of using, felt like it put him at ease, but it was a lie. He had to see it as the lie it is.

Another is Forget Everything and Run. Many people, like Elroy, have pain and run away from it in substance abuse. The feelings are numbed, but do not go away until we face them.

So the last is Face Every Adversity Resiliantly. That is what Elroy has done and is doing in his program. It is hard to face the past, the pain and the mistakes. We believe that when Jesus said to get on the narrow path that leads to life, He was speaking of the process that Elroy is on. That process, as Elroy found out, is going through the fear that cripples so easily and seeing the One who overcame death and set us free.

By Tom Bond, Director of Programs

At HUM, we have 26 Biblical character qualities that we work to instill in the men we serve. I could not help but appreciate how well the character quality of patience fits Drew’s journey. One of the first things we say to men coming into the program on day one is “sit still, be patient, and listen for God”. You cannot hear God’s voice if you are constantly surrounded by chaos. When men arrive here, they are separated from the chaos of the outside world. For the first time in a long time (maybe ever for some) they can actually sit still and quietly wait on the Lord.

Drew’s story illustrates the power of patience and of the miracles that happen here every day! Drew sat still and he did not lean on his own understanding. Rather, he listened patiently to discern where God was leading him, and now he has been given the opportunity to join an incredibly dedicated group of HUM employees, many of whom were once program clients just like him. Moreover, this “grow your own” model creates a community with a culture built upon the very tenants of Jesus’ teachings. This culture of hope, love, and grace is something every visitor can feel in their soul the moment they pass through our front door. I urge you to come see for yourself!

Helping Up Mission is full of guys—500 of them! Tall and short, skinny and plump, smart and not-so-much, nice and…well, working on it! The vast majority of the men who spend each night on our campus are in our 12-month residential Spiritual Recovery Program or grads living in our graduate transitional housing.

Like so many guys here, Darius also had a genuine spiritual encounter with Jesus. But, like so many, he also continued to struggle with his recovery.

But Darius is a fighter and keeps battling back. In fact, he just got word he’s been given a reprieve on his vocational training coursework and grant-funding. If all goes well, Darius will finish that program the same day he graduates from Helping Up Mission. Wahoo!

By Tom Bond, Director of Programs

I don’t even know where to start after reading Kirk Wise’ story. His story is clearly demonstrative of so many recovery concepts and ways that men get healthy at HUM.

But what really strikes me is this: Helping Up Mission is really a ministry comprised of multiple “mini ministries” – all working in harmony, opening doors and empowering men to find hope and healing as they rebuild their lives.

Kirk happens to be part of one ministry (Intern Training Program) and helps supervise two other ministries (HUM Choir & HUM Band) which are both overseen by Kim Lewis, one of our many board members who also wears a “volunteer hat” at HUM.

Kirk is also part of the Back on My Feet running team ministry. BOMF is part of a host of strategic community partners who operate synergistic and collaborative ministries on HUM’s campus.

If you pay a visit to HUM, which I strongly encourage, you will see this amazing “concert” of healing ministries all working together to provide life transformation for hundreds of men each year. And we all know that our Lord and Savior Jesus Christ is the grand conductor of this incredible symphony.

How do people change?

It’s a question we grapple with a lot here at Helping Up Mission. This month you can read the story about Kevin Hough. He got to the point where he said, “Kevin can’t change Kevin…I have to change Kevin.”

What does that mean? Well, it could mean a lot, but for Kevin, like most of us, the decision to be vulnerable enough to say something has to change is big. But to allow yourself to lose the part of you that you built for so long, and find the real (Kevin) is where the real change takes place. That usually means dying to the old self and putting on the new in which God is recreating. The wonderful thing around the Mission, if you read Kevin’s story, is that he allowed himself to enjoy painting, singing, working…all things the old Kevin ran away from.

We rejoice in all of the facets that God uses to bring about real change, to conform people into their real selves. The one in Which God restores.

Jerome arrived at Helping Up Mission in October 2010 already with 28 days of clean time – but he knew he needed more.

Before long, Jerome realized he wanted lots more than just clean time. So, he signed up to work toward earning his high school diploma. He received it in May 2011, one of almost two dozen HUM guys who earned one that year.

When Jerome arrived here he had no teeth left, due to his addiction and lifestyle. With the help of our community partners, he received a complete new mouth-full of teeth – one of almost seventy HUM clients that year with extractions, cavities filled, crowns, root canals or dentures from University of Maryland School of Dentistry.

In October 2011, Jerome completed our 12-month residential Spiritual Recovery Program – one of over one hundred men that year.

But he still wasn’t done. Living in graduate transitional housing here on campus, he started college in the spring of 2012. This June – with a BA in Human Services from Sojourner Douglass College – Jerome became the first member of his family to ever graduate from college!

And, with just one more course, he’ll have trainee status as an addictions counselor. Now Jerome’s set his sights on going back to work in that same Eastern Shore facility which sent him here almost 5 years ago!

“Do not be conformed to the pattern of this world but be transformed by the renewing of your mind.” These powerful words come from the book of romans in the 12th chapter.
“So, my mind is filled with pictures like get money, go use,” said Donnie, now in his 50th day at HUM.
“So, I was excited to go out after (45-day) blackout. Get moving some…breathe some real fresh air,” he said, reflecting on the weekend. “So my cousin calls me…says to come over. My niece and nephew were there. Had so much fun kicking a ball around, taking a hike…laughing hard…so hard…then..filled with good energy helped him build a deck…he gave me a few dollars for the work..”
Normally, Donnie’s pictures in the mind are filled with images…”Get money, go get drugs.”
“So I go around back to the house, pick up my niece and nephew…go get dinner and ice cream.” And, then he said with a big smile, “That is a much better picture in my mind…I’m gonna let that picture sit around in there and percolate a while…mmm…mmm….good.”
The goodness of a renewed mind, and the power to change the past.
Mike Rallo, Spiritual Life Director
Latest News